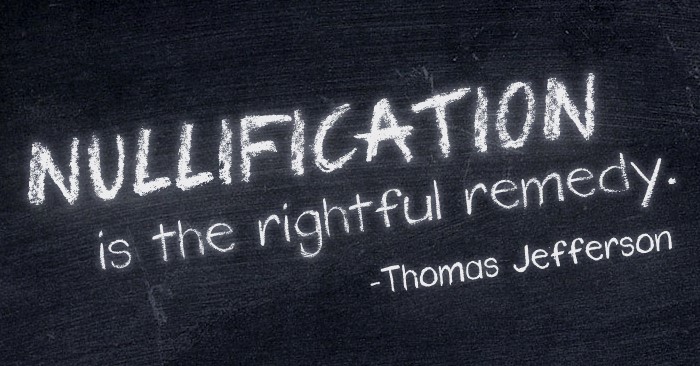 Nullification is when a State declares a federal law (or policy, mandate, order, regulation, etc.) to be unconstitutional (not allowed by the US Constitution) and therefore null and void in said State.

Interposition goes one step further by the State putting itself between her Citizens and the federal agents who might attempt to enforce the unconstitutional law.

Example: The federal law that requires shotguns to have barrels at least 18″ long is unconstitutional. Congress had no authority under Article 1, Section 8 of the Constitution to enact such a law. A state would NULLIFY said unconstitutional law by simply declaring it unconstitutional. But that’s just declaring what is true without preventing a federal agent from arresting a citizen of the State who saws off his .410 shotgun to make a better snake gun to protect himself from rattlesnakes. The State needs to also INTERPOSE itself in defense of the Citizen by making it a felony for any agent of the federal government to attempt to infringe on the Citizen’s right to own and sell the modified shotgun.

Most of what Congress does (and has done) is unconstitutional.  Congress has become the problem and cannot be counted on to correct the problem.  It’s now up to the States.  It’s the Governor and the State General Assembly that must tell the federal government to back off.  I don’t see the federal government saying “oops, we were wrong, sorry, we’ll voluntarily give up all the control we usurped from individual Citizens and States.”  It’s not human nature and even if a few states were able to elect Constitutionalists to Congress they would not be in the majority in the foreseeable future.

The State’s authority for taking this action is based on the 10th Amendment.